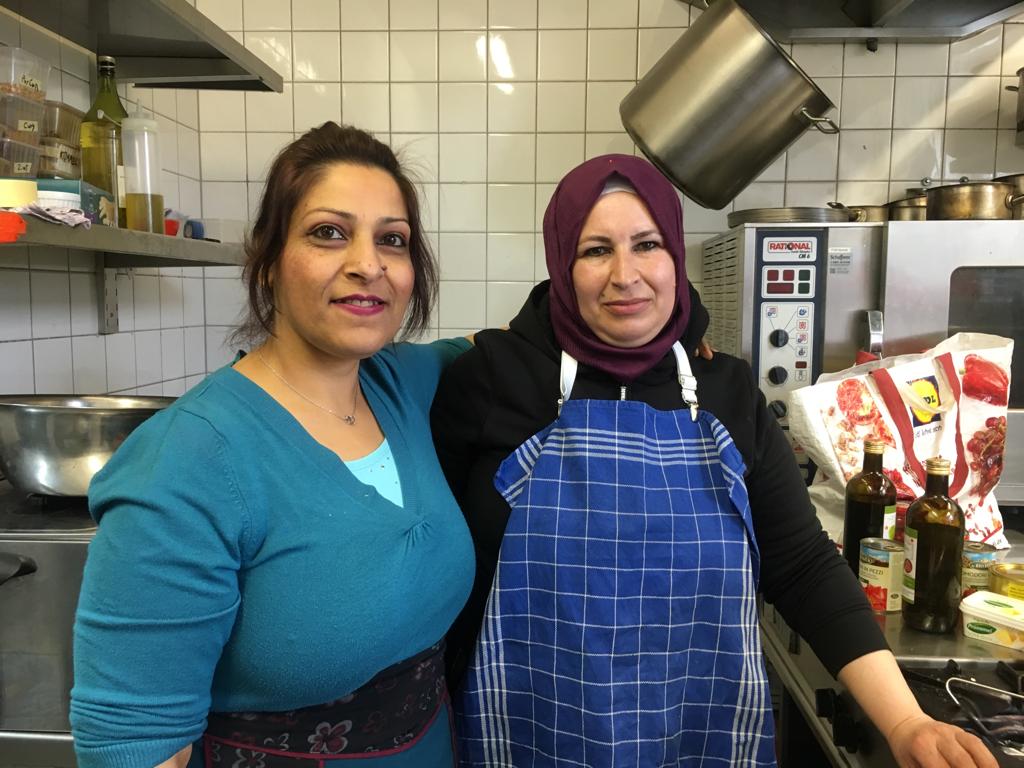 Suhad Ali (right) with her supporting friend, Rudainah Aljanabi; both from Iraq.

Zusammen Kaffee is a project by Zusammen Leben; it creates a culinary journey around the world by hosting monthly-rotating international guest chefs with migrant background in Freiburg. On three days per week, Zusammen Kaffee opens its doors at the Strandcafé on Grethergelände. This year, four volunteers from our school have been working towards the realization of Zusammen Kaffee´s mission of creating a space for encounter for migrant communities in Freiburg: Elizabeth Gimba (South Sudan/Kenya), Arezo Ghoulami (Iran/Afghanistan), Merle Klemm (Germany) and Yuchen Qian (China). During their volunteering period this year, the students worked with guest chefs from Pakistan, India, Syria, Lebanon, Turkey, Guinea, Germany and Iraq and managed to offer diverse lunch menus, ranging from Arab, African, to German and East Asian dishes. In a sustainable fashion, they cook with regional and organic fair-trade ingredients – with the exception of specific culinary rarities that cannot be purchased either regionally or organically.
An impressive aspect of Zusammen Kaffee is that the guest chefs behind the international lunches are given the possibility to introduce themselves to Freiburg and to establish themselves as cooks. Further, provided that 11.9% of Baden-Württemberg inhabitants live below the poverty line and are excluded from daily social and cultural life, there are no fixed meal prices at Zusammen Kaffee. Guests having lunch in the cafe decide how much they want to pay for their food and 12% of the dishes are distributed for free.
In addition to living diversity through food, Zusammen Kaffee has monthly cultural events with music, literature, theatre and dance to better enhance the integration and migrant experience in Freiburg.

Below is an interview by the guest chef from one of our Wednesday sessions: Suhad Ali from Iraq. Suhad moved to Germany only recently and hence does not speak German yet. As she speaks Arabic, we had a translator to break the language barrier; as a result, the responses might not be as precise but still try to paint an accurate portrait of what Suhad expressed.

What aspects of Zusammen Kaffee made you volunteer as a guest chef in the organisation?
I value what we do in Zusammen Kaffee and I love cooking. Back in my home country in Iraq, I had a professional cooking training and was a chef. This is why I did not hesitate to support Zusammen Kaffee, which gives platforms to established chefs like me with a meaningful purpose of having a more cohesive community.

How does cooking on a Wednesday morning make you feel?
I feel satisfied cooking this morning with Zusammen Kaffee and I love what I am cooking. Whenever I cook, I forget about all my personal problems. In cooking, I find my peace.

What meal are you preparing today?
I am cooking rice with spinach sauce and meats. Afterwards, I shall prepare Arabic sweets, too. I don´t have one name for the whole meal.

Why did you choose this meal precisely?
This is a recipe I have used before from Iraq and many people enjoyed the meal and gave me positive feedback as they were happy and found the particular dish delicious. I wanted to prepare it again for those reasons.

What does the Zusammen Kaffee community mean to you?
I feel like I am with my family cooking here. I am not here just to cook for Zusammen Kaffee, but I also speak with fellow guest chefs and volunteers. We speak about our lives and our challenges. To me, that is more than just cooking.

How would you describe Zusammen Kaffee in one word?
Happiness.

Given a chance to talk to the Freiburg community, what would you want to tell them about Zusammen Kaffee?
Zusammen Kaffee is truly an integration space that I value; I would love to bring to the attention of the Freiburg community how kind and willing the people at the café are. As part of Zusammen Kaffee, I feel happy because I now know more people and I am currently learning the German language. I hope to integrate into the German culture and, of course, to continue learning from other people from other countries, including more recipes from the other guest chefs. 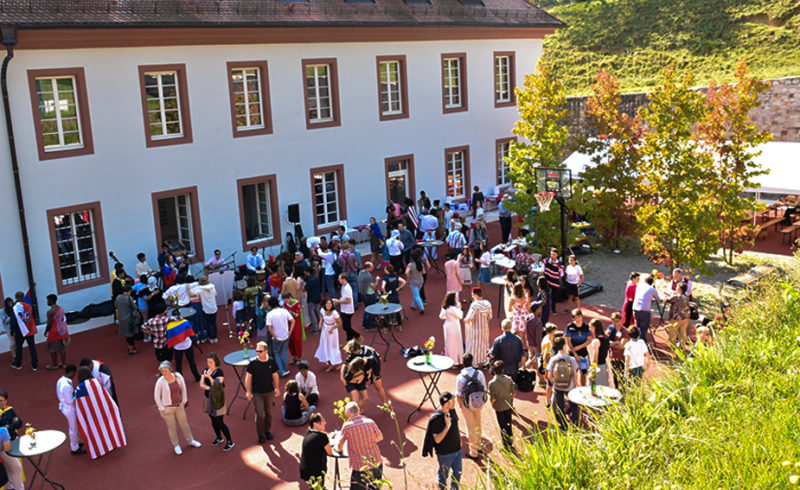 After a two-year break, we would like to invite you to join our Open Day on September 17, 2022 from 12 to 5 pm. Together with visitors from Freiburg and beyond, we would like to enjoy an afternoon in community, …